The capsicum is a genus of plants of the nightshade family (Salanacea) that grows luxuriently in all tropical countries and many species of which are cultivated in the temperate zone. Capsicum or Red Pepper is of American origin for these reasons: Fruits so conspicuous, so easily grown in gardens and so agreeable to the palates of the inhabitants of hot countries would have very quickly diffused thruout the old world, if they had existed in the South of India, as it has sometimes been supposed. They would have had names in several ancient languages, yet neither the Romans, Greeks nor the Hebrews were acquainted with them. They are not mentioned in ancient clinic books. The islands of the Pacific did not cultivate them at the time of Cook’s voyage in spite of the proximity of the Sunda Isle where Rumphines mentions their very general use. The Arabian physician, Ebn Baithar, who collected in the 13th century all that eastern nations knew about medicinal plants, says nothing about them. Probably the first known history of cayenne pepper in Europe is that given by Martyr, who writes of Columbus bringing it home in 1493 and speaks of it being more pungent than that from Caucasus, probably referring to the Oriental black pepper. About a8 century later, Gerarde writes of its being brot into Europe from Africa and Southern Asia and being grown in European gardens. Probably the first record of its use is that by Dr. Chanca, who was physician with Columbus’ fleet in 1494, and who alludes to it as a condiment used in dressing meats, dying and other purposes, as well as a medicine. From the ground dried seeds and pericarp of certain varieties of capsicum we get cayenne pepper, so-called9 from Cayenne, in French Guiana, S. A., whence it was imported by the French. Cayenne pepper is also called Calicut and Napaul, the names of places of export, and it was known as Guiana pepper over 300 years ago. The derivation of the word “Capsicum” is uncertain; it may be from Kapto, hot, on account of its pungent taste, or from capsa, a box, or chest, referring to the form of its fruit. The plant grows from 1 ft. to 6 ft. high and is fairly well branched; the flowers are white or greenish-white; the fruits of the several species are of various forms, round, oblong, cordate or horned, and contain a number of flattish seeds. The seeds after the removal of the pericarp, and then thoroly washed and dried, are entirely devoid of acidity and pungency. The hotter and drier the soil, the more acrid and pungent the fruit. 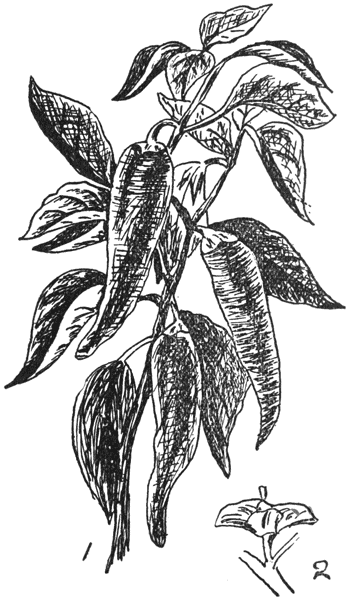 Used in moderate quantities, capsicum or cayenne pepper, promotes digestion and so prevents flatulence. The natives of Brazil boil the capsicums and dip their manioc bread in it, making a kind of fiery soup. They are extensively used in India in compounding curries and chutneys. In Bengal the natives make an extract from the small capsicum chilies of about the consistency of molasses. The bell peppers are pleasant stuffed with meats, fish, other vegetables, etc. The sweet and mild kinds fed to birds are said to improve their plumage.

C. Annum is the most common species and contains a great many varieties, among them the Pimiento (not Pimento or allspice) commonly known as Spanish red peppers or morrons, also Paprika,10 or Hungarian sweet pepper. This species is never found growing wild.

C. frutesens is sometimes called goat pepper and is generally described as the true cayenne. Its leaves are from 3 in. to 6 in. long by 2 in. to 3½ in. wide, the fruit is red, obtuse or oblong accumminate, ¾ to 1½ in. long and ¼ to ¾ in. in diameter. It is very acrid and pungent. It is only cultivated in the tropical regions, as the seasons in the temperate climate are not long enuf to mature the fruit.

C. baccatum is ovate of sub-round and about ¼ in. in diameter. C. baccatum have been known in the English gardens since 1731.

C. facticulatum, also known as Mexican chilies, is a shrubby plant of Sierra Leone, and grows in Zanzibar; also known as small chilies, or red cluster peppers. The fruit, which grows erect, is oblong linear, not quite an inch in length and of a deep red orange color. Another variety, which are mostly consumed locally, have larger red and yellow fruit. Zanzibar capsicums or chilies, are dirty looking, of a brownish-red color and very hot. A variety from Japan are bright red, not so pungent as the other growths, but of finer aroma.

C. ceresiforme, the fruit is spherical, sub-cordate, oblate or occasionally pointed. The flesh is firm, from 1-12 to ½ in. thick, and very pungent; from the shape of its fruit it is called the cherry capsicum, or pepper.

C. grossum, originally from India, grows 2 ft. high, with a few branches and large leaves 3 to 5 in. long, the fruit is large, oblong or ovate, and is known as bell pepper; it is mostly used for stuffing and pickling;11 the skin being thick, soft and tender and of a mild flavor.

C. abberciatum, with ovate fruit about 2 in. long. While this variety is used to some extent for pickling, it is cultivated more as an ornamental plant.

C. longum grows to about 3 ft. high with comparatively few branches, the fruit is often a foot long and 2 in. in diameter. The flesh is thick and flavor mild.

C. Acumination is about 2½ ft. high. The fruit, which is small, grows both erect and pendent.

C. Conordes, with oblong linear fruit, which grows erect, is very acrid and pungent. It is known as tabasco capsicum or pepper. Bird pepper, bird’s-eye chilies, red-bird pepper, etc., are commercial names given to the mild, sweet varieties of capsicum on account of their being fed to birds. Nepaul pepper, commercial name for capsicum imported from that place in India. Nepaul pepper has an odor and flavor resembling orris root and a pod the color of amber when dried. It is most esteemed as a condiment, being aromatic and appetizing, and not so acrid or biting as is most cayenne. Paprika, commercial name for the mild, sweet varieties of capsicum, chiefly grown in Hungary, Spain, Portugal, Jamaica, Japan and Zanzibar.

Japanese pepper is the fruit of Xanthoxylum, an entirely different genus of plants to the capsicum family. The fruit capsules when bruised are agreeably pungent and aromatic. It is much esteemed as a condiment in China and Japan.

Tabasco pepper sauce originated with Mr. E. McIllhenny, of New Iberia, La., in 1868, from a variety of capsicum in which the fruit grows erect, and was12 brot by a soldier friend of Mr. McIllhenny from Tabasco in Mexico after the close of the Mexican war.

Tabasco catsup originated with Mr. George Bayle of St. Louis, Mo. The base of it is said to be equal proportions of powdered capsicum and essence of tomatoes.

Ground cayenne pepper soon loses its bright color when kept too long or exposed to the light, and becomes dingy in appearance, so it is not always wise to judge by looks alone, as red ocher, turmeric, mustard, rice, sawdust, salt, brick dust, etc., have been found in cayenne pepper.

The large fruits or pods are commercially known as capsicums, and the smaller ones as chilies. The term pepper is a misnomer as applied to this spice.

This site uses Akismet to reduce spam. Learn how your comment data is processed.

How To Use This site

To enhance your concentration, read a passage in a book you have never explored, (this site chooses interesting new passages). Then
try to recite it verbatim. Practice this for only 5 minutes a day and enjoy the results which
follow after a few months of effort